I hope everything is OK
Thank you very much to all those who have supported us over the years, so that this book can be presented smoothly.

Hope all is well.

I have important news to announce, in about few months, my book – Decoding Tao Te Ching will be launched. This is the first time a famous publisher asked me to decode the ancient Chinese book – Tao Te Ching, which has been translated more often than any other book in the world, with the single exception of the Bible. Like the Bible, the Tao Te Ching is a book whose appeal is as broad as its meaning is deep. As with every text that deserves to be called sacred, it is a two-sided coin… 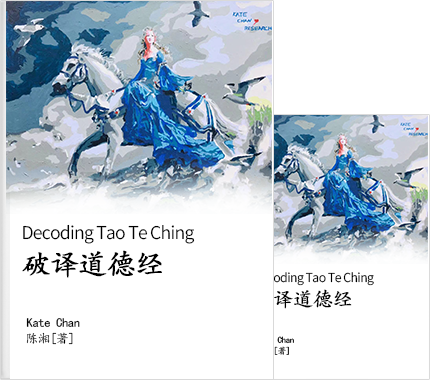 Unlike any other times the Tao Te Ching had been translated, this time, as a Chinese researcher filled with western research methodologies, and most importantly, having spontaneously completed the kundalini process early 2018, I not only reinterpreted the Tao Te Ching (of 2,500 years ago) but also decoded what’s underneath into a 330 page book with more than 700 footnotes and 230,000 characters. I disclosed the “knots” which have been occurring for centuries, found solutions to today’s problems, broke down the methodologies that help transcend consciousness, and found similarities between the Tao Te Ching and 30 other books, consisting of the Bible, the Talmud, the Kabbalah, and books of Tao, of Buddha, of ancient Egyptian wisdom, of Sanskrit, of ancient Greek philosophy (philotimia), and of interdisciplinary texts, and so on.

I must truly say that I have never cried after having completed a research report for all the years I’ve worked, but I cried this time after completing this book, because for the first time we will reveal and know what “oneness” and “God” really mean in more than 70 terms and classifications. For the first time we won’t be fooled anymore by confusing terms and misleading information. And, for the first time, let all be illuminated and enlightened, not just individual aspects. Let the forefather of the “knots” resurface, let all be untangled and unfolded, and let there be no confusion, ignorance and chaos anymore…I also cried because I discovered the Truth after 39 years of my life time, and because humankind will be able to discover the truth, after 13,000 years of human life collectively...

Sometimes I wonder: whether 112 English research reports and spontaneous kundalini completions were the preparation for this book? it feels like so pre-destined and mysterious in some way. Anyhow, I am very grateful for the entire process, which helped me transform and transcend my consciousness, today I can better understand many things, like those classic questions such as who I am, where I am from, what’s my purpose on this planet in this lifetime, where I am going, etc. A real eye-opening experience!

The book has been written in Chinese and is being prepared in many languages: English, Sanskrit, Hebrew, French, and Greek in which languages certain terms are being thoroughly described, in order for better comprehension. This book is for all beings and is supported by the higher realm out of this world!

Many thanks to all who have shown their support for all these years, so that a real book can be presented.

Thank you so much for your purchase! We hope you enjoy the book!